On a full-electric ship, all the power, for both propulsion and auxiliaries, comes from batteries. A plug-in hybrid ship, similar to a plug-in hybrid car (PHEV), is able to charge its batteries using shore power and has a conventional engine in addition. The ship can operate on batteries alone on specific parts of the route, when manoeuvring in port, during stand-by operations. A conventional hybrid ship uses batteries to increase its engine performance and does not use shore power to charge its batteries.

The introduction of batteries enables selection of smaller engine sizes that can operate at optimal loads for a larger portion of the time, due to additional power being obtained from the batteries when required (peak loads). When power requirements are low, the batteries can be charged using the excess energy generated by running the engine still at the optimal load. Also, for vessels with electric cranes and other cargo equipment with transient peak loads and options for regenerating power, batteries can introduce significant benefits. Alternatively, in operating conditions requiring very low loads, the ship may be able to operate on battery power alone saving engine running hours, fuel- and maintenance cost.

Hybridization is expected to have a wide range of applications, but is likely to be particularly relevant to ferries, offshore vessels and tugs. In addition, hybrid solutions are in general suitable where there are large fluctuations in power output, where the battery bank can stand for power spikes so that engines are constantly operating smoothly within optimal range. Hybridization with batteries can be used on ships with both diesel, LNG and biofuels. Hybridization requires by itself no charging infrastructure on land.

The specific fuel oil consumption of, and emissions from, an internal combustion engine depend on the engine load. Typically, engines are calibrated for optimum performance at high loads. For ship types that experience large load variations during operation, the introduction of batteries may allow the engines to operate optimally with respect to fuel oil consumption and/or emissions. An example of this is dynamic positioning (DP) vessels often experiencing high transient power demands while operating frequently at unfavourable low engine loads.

For the cases when operation solely on battery power is feasible, e.g. for the initially very low engine load operations, maintenance costs can be reduced by avoiding incomplete fuel combustion. Incomplete fuel combustion can lead to contamination of the lubrication oil and the build-up of carbon residue on vital engine parts, inflicting amongst others increased maintenance cost and fuel consumption.

Hybridization of a vessel is favourable also for use in conjunction with direct current (DC) grid system on board. A DC grid system can amongst others disable restrictions for speed on power producing engines, enable these engines to be more optimum at energy storage and production for hybrid vessels resulting in overall fuel savings. 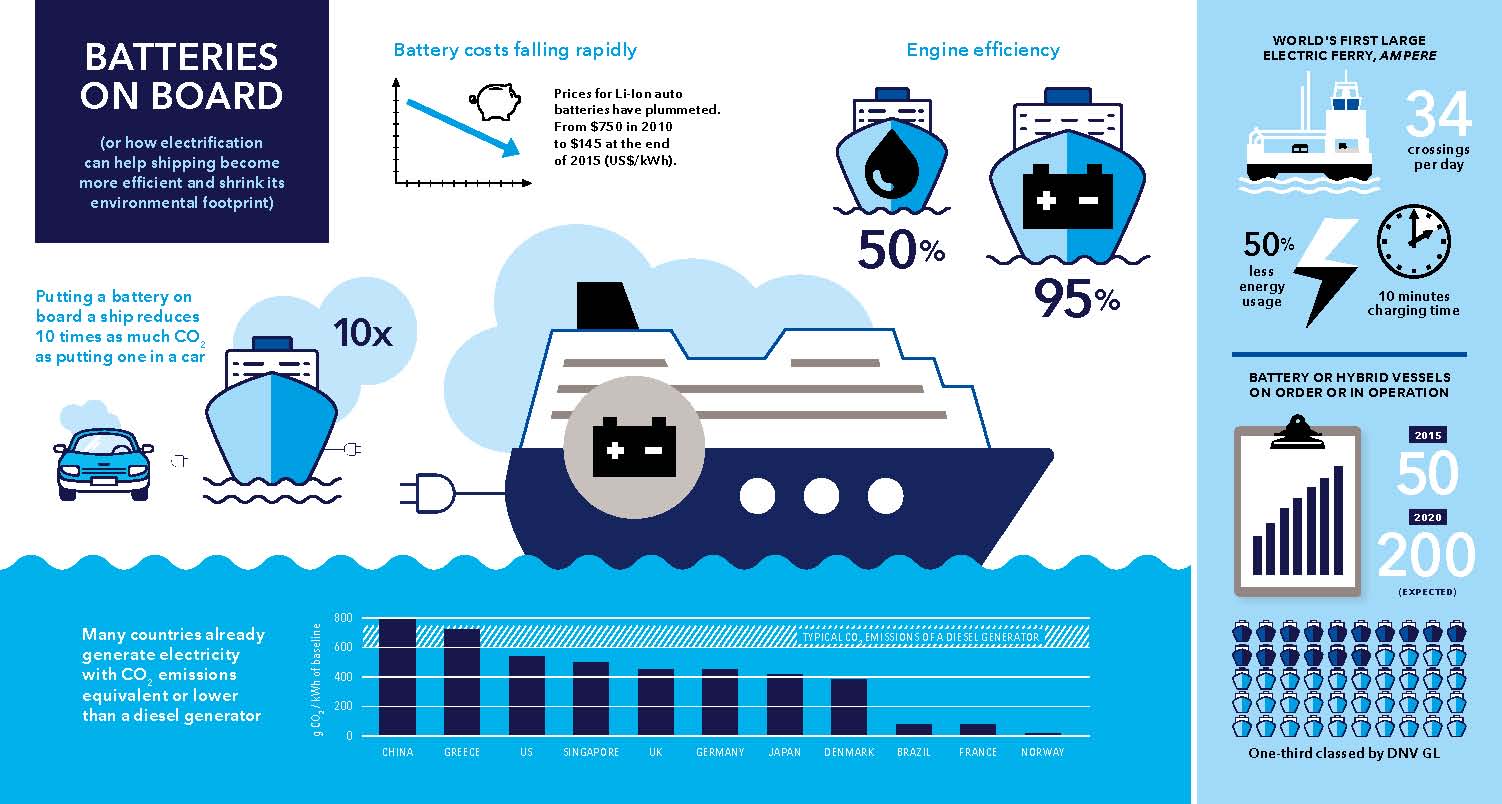 A conventional hybrid ship will have an additional cost in the range of $600,000 to $2,000,000 (USD) where the cost increases with the engine and vessel size.

For a full-electric ship the cost of implementation is in the range of $4,800,000 to $6,000,000 (USD). Again, the costs will increase with engine size and are dependent on vessel type, size and operational profile.

The reduction potential is estimated at 15% to 30% of total ship fuel consumption depending on vessel operational profile, power production and consumption profile, engine specifics, rules and regulations, etc.

*This Information Portal is still under development and further images will be added. For suggestions and additional technologies to be included in the Information Portal, please use the GreenVoyage2050 Contact Form.

This Energy Efficiency Technologies Information Portal was developed in cooperation with DNV GL.

This webpage serves as an Information Portal for Energy Efficiency Technologies for Ships. IMO does not make any warranties or representations as to the accuracy or completeness of the information provided. View our disclaimer